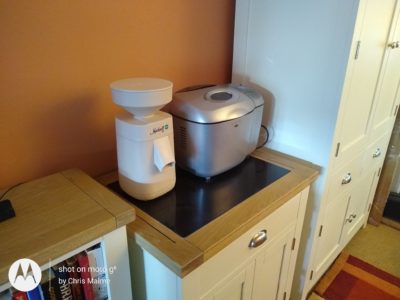 At the end of 2020, I bought myself a home flour mill, from Mockmill. That’s it, next to my trusty bread maker.

I find it strange that apart from a Christmas post, I don’t seem to have made mention of it here. This is perhaps reflected in that although I have had some fun with it, up until now, I haven’t made the full use of it that I intended.

At the time, flour was becoming hard to get hold of in supermarkets, with half the country turning to bread-making. I could still get flour in bulk, but decided not to because of storage and shelf-life. Although I knew not much about milling, I did know that grain was much easier to keep than flour, and I do like a good gadget, so I bought the Mockmill.

However, I found myself soon defeated, with a horribly heavy loaf. The Mockmill produced great flour, but I found it hard to adapt to 100% wholemeal, either baking by hand or machine. I was perfectly fine with 50/50 white/wholemeal, and that is how I proceeded. But that kind of defeated the original objective, as I had to buy the white bread flour (which, as it happened, became available again).

So for the last year, I have been either making 50/50, or else simply buying bread again. 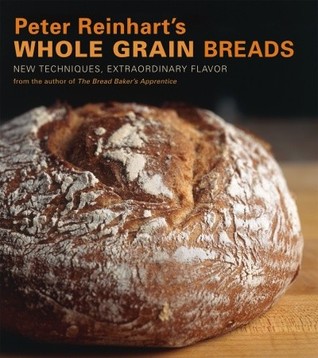 But now I am retired, and have more time to devote to experimentation. One approach I have been reading about, in a book recommended by my friend Piers – Peter Reinhart’s Whole Grain Breads. This is a quite excellent book, with various techniques, one of which essentially involves soaking the wholemeal flour – without yeast and other ingredients on the counter-top overnight. Meanwhile, a smaller piece of dough – either sourdough or commercial yeast – is made and allowed to ferment in the fridge. Then the two are combined and kneaded together.

It is a little more complex than that, but not overly so, and I plan to do something with it sometime soon. But in reading about it, I learned more about bran and how it is detrimental to bread gluten formation – again, it isn’t simple, but my wholemeal flour is about 13% bran. This is not a thought original to me, but – sieve that (mostly) out, and what you have left is closer to “white” bread flour, with regard to gluten formation.

The first time I tried it, with a sieve I already had, and could get precious little through it. It was going to take me forever to sieve enough flour for a loaf – something I had seen others complain about. But I thought, “let’s try a more open sieve”, and got one that was 40 mesh (I think my original was 60 mesh). Amazingly, it went through, and left something resembling bran behind; and when I used that to make a loaf – BINGO! 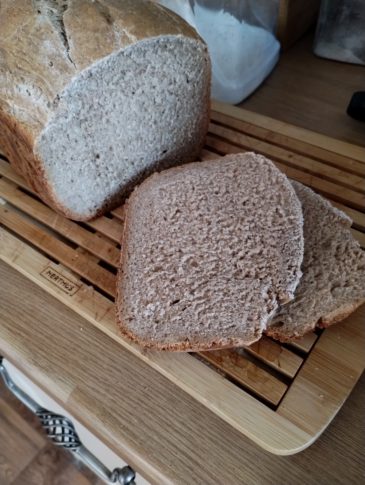 Not perfect, but pretty good – a close crumb, but not dense, and perfectly good for sandwiches. A nice crust, and also very nice toasted.

There’s a lot more room for experimentation – using this method, and the other one, but this is a definite result, and one that make me optimistic enough to keep going.

Note that this loaf was made in my bread machine, on standard settings. As it happens, my machine allows for adjustments in its programmes, so one approach will be to adjust rise times. Another will be to try the same process, but bake by hand.

I’ve also seen mention that the bran removed by sieving can be soaked and added back to the loaf, after the initial rises, but before knock-down. That’s probably worth a try at a later stage.