I had one of these yesterday, and it was delightful. Cinnamon-sugar cupcakes made with melted butter. Delicious. 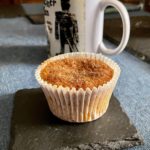