Last year, I planted too many Brussels. I bought a pack of 20 plugs, and planted 12. This was far more than I needed, but I figured I would pick the stronger growing plants, and dig up the weedy ones. The other 8 I advertised on the local freecyle, and carefully packed them with damp paper towel to keep them good while the person who asked for them picked them up.

Two things happened. Annoyingly, the chap who so very much wanted the plants, and thanked me for them, failed to show up 3 times. In the end, I stopped emailing him. The other thing was that of the 12 I planted, 6 just wilted and died, and the others didn’t really thrive.

Wondering if it was something to do with the earth in that trough, or what had been planted before, I decided to plant the other 8 in another trough. The guy came back to me about the plants a week later, I told him that it was too late, I had used them, and they would have died anyway.

Of course, what happened was 5 of the 6 non-thriving plants suddenly found a joy for life, and of the new 8, 4 grew well. So after purging the ones not making an effort, I had 9 plants.

Since before Christmas, I have been picking Brussels as I needed them, and very nice they are too. But I simply couldn’t keep up. A week or so ago, I saw the plants weren’t looking brilliant – healthy yes, but the sprouts closest to the earth started opening up and were leafy. So I thought I’d better do something.

Which brings us to today. I’ve just gone through all the plants, only picking the good firm sprouts, and not worrying about any that weren’t – they went in the garden waste with the plants.

Even so, I have a ridiculous amount of sprouts. Far too many to eat before they go bad. 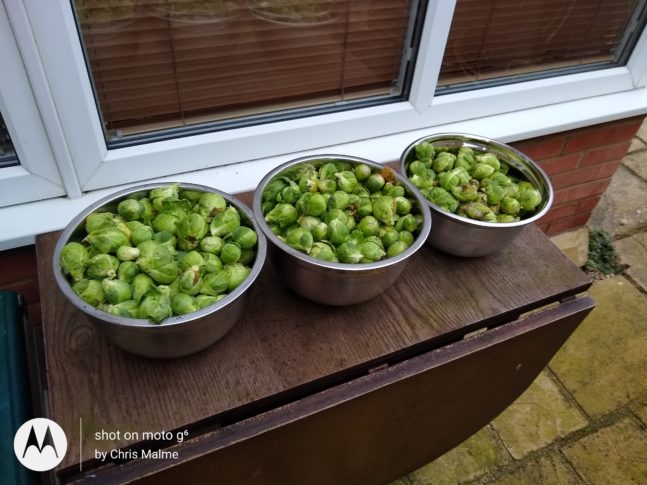 So my plan is to trim and prepare them. The small ones will be blanched, and then frozen. The large ones (and there are some very large ones) cut in half and roasted with salt, then frozen.