About a year ago, I bought a new Air Fryer from Ninja, and loved it. Some time later, I wanted to buy a gift for a friend’s new kitchen, but the Air Fryer was out of stock, so I bought them a Foodi instead. They ended up loving it.

Subsequent to that, a few other friends have bought the Foodi – essentially on my recommendation.

Meanwhile, I had my Air Fryer, and an Instant Pot, so it would be silly to buy a Foodi for myself.

Except that some neighbours had a fire, and lost a lot, and while they were in temporary accommodation and rebuilding, I asked if they would like my nearly new Instant Pot. They were very grateful, so good deed done, I decided to reward myself.

The Ninja Foodi is a combined pressure cooker, slow cooker and air fryer. It manages this by having two lids. The Air Fryer lid is permanently attached, hinged at one side, and containing a powerful heating element and fan. With that raised out of the way, you can use the Pressure Cooker lid, which locks on to the cooker. All cooking takes place in the large easy to clean pot, but in Air Fryer mode, there is an optional basket insert. As well as the modes mentioned, it also has a steam setting, and can also be used as a convection oven. The version I went for was the Foodi Max (of course), which also has a dessicate setting.

So my new purchase actually replaced three counter-top devices in my kitchen – the Instant Pot that I gifted, my Air Fryer, and my trusty Morphy Richards slow cooker. And although it is big, once I had cleared the old devices out of my kitchen, it didn’t particularly dominate the tops. Even with my other recent purchase, a Ninja Food Processor, I still have more preparation space than ever. 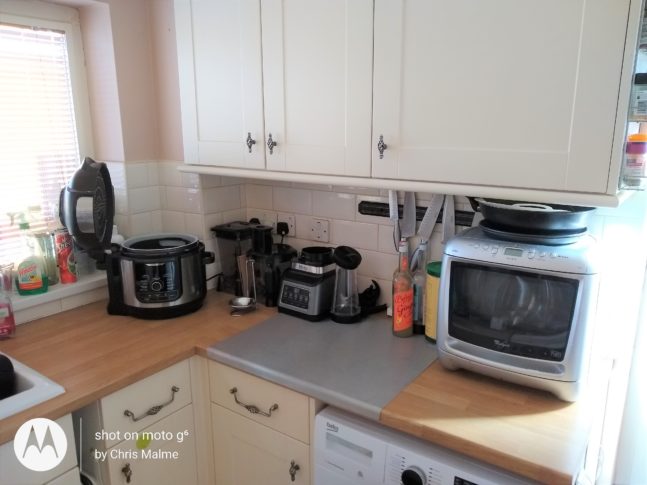 Anyway, since the purchase, I have been playing with it, and it is wonderful. It can do absolutely everything my Air Fryer could do; I’ve made a couple of good stews in the pressure cooker (I have yet to experiment with the slow cooker mode), and I’ve cooked an excellent roast chicken. One of the benefits of this multi-cooker is that you can cook a chicken in pressure cooker mode (15 minutes cooking time) and then drop the air-fryer lid and crisp the skin (another 15 minutes). Moist, well cooked chicken, without the fuss.

I really am enjoying using the Foodi Max. I have a lot more to learn about it, still, but it all seems straightforward.

As for my old Slow Cooker and Air Fryer? They are packed away in the garage. It occurs to me that next time I have a BBQ, it might be fun to set up the old Air Fryer alongside, for just turning out chips!