More on my back garden. The gardeners who laid my front lawn also did two heavy jobs for me in the back. They emptied all my vegetable troughs – which were still half-filled with clay, from the gardeners we no longer mention – and they laid down more gravel around the troughs.

Emptying the troughs meant that I could inspect them, repair them and move them, as I had in mind a different arrangement. Originally, I had them arranged side by side, with space to walk around them.

However, that arrangement was before Katie the Beagle came to stay. If given a choice, she will do a poop in each area between the troughs and at either end as well. So I decided to rearrange them to product a larger area, easier to keep clean.

This would also let me screw them together for mutual support, as the troughs are getting older, and also move the end trough further away from the jungle of nettles and other plants I like to leave in the corner for the bugs and birds.

One of the troughs had been notably tilted for a year or so, and I wondered if something had given inside, due to the weight of clay. It turned out that it was perfectly fine, it had just settled further into the gravel. Once dug out, it was level with its neighbour and screwing them together would keep them that way. 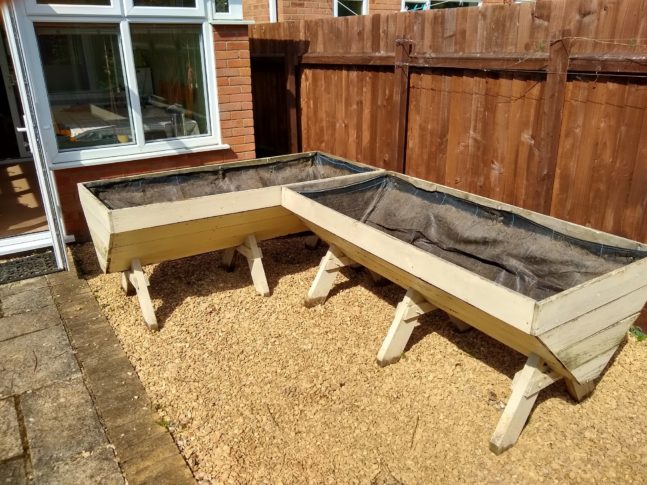 But another trough was clearly broken. The end had rotted and was falling off. 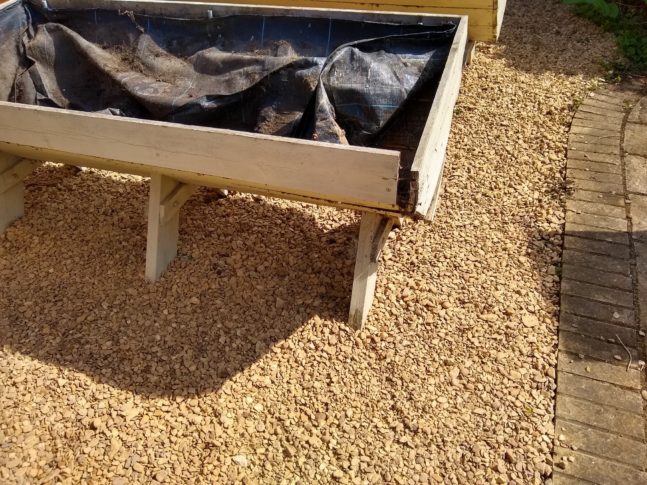 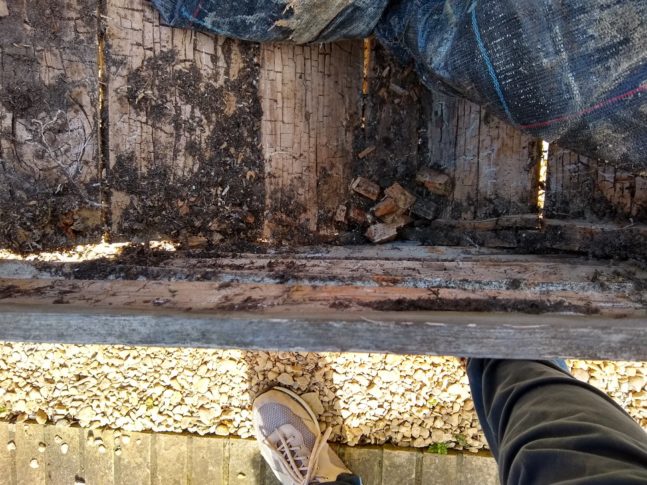 I could have screwed it back on, but the end was soft with rot, and the screws would have simply pulled through. I considered scrapping the trough, and just having 3 – still good for veg growing. But what I have decided to do is strengthen and pull together the planks of the body with some fresh wood, then fix that to the end of the neighbouring trough, so they share the same end. I think that will keep me going for a few more years, until I have to replace all of them. 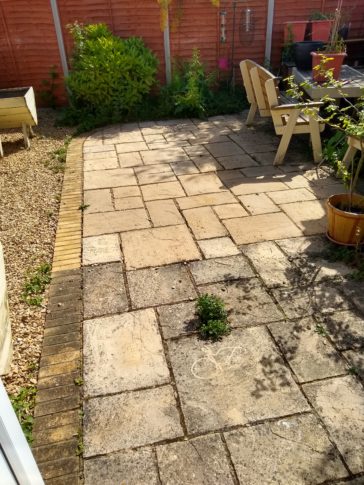 To give the gardeners as much room as they needed, I’d moved the garden table and benches into my BBQ area. So while the patio was clear, I decided to pressure wash it. Alas, my old pressure washer sprang a leak – probably repairable, but I didn’t want to fuss with it. So I gave it away on Freecycle (“leaks, needs major repair”) and bought a new one. This has done a great job, but I find it back-breaking work, so have been doing it in bits. Just the same, I should have it finished this week, and it is definitely an improvement.

Yes, and as you can see by that little forest growing in the middle, I need to regrout some of it too!

The new pressure washer is much better than the old one, and has a greater range of pressure nozzles, including a foam cannon, for washing cars. It’s just when using it to clean up pavers, you need to be fairly close to the paver, and for my height, that means walking around in a stoop; hence the backache.

When I planned all this for Mid-May, I had in mind getting my bit all done very quickly, and getting some stuff planted. I’m now not making any plans for growing this year, unless I get some over-winter veg in. I’ll just get the job done, and in a good position for next Spring. Of course, this being me, that may all change, once I get the troughs sorted; but at least I am no longer under any pressure to get it all done.