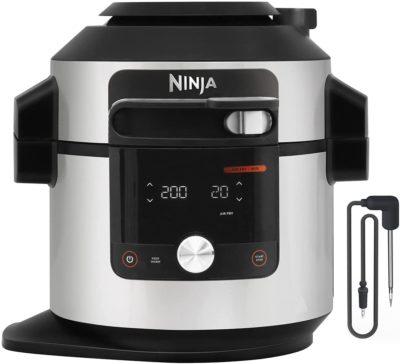 I’ve mentioned this device in a couple of posts, but didn’t actually post about acquiring it.

I bought my first Ninja Foodi in 2020, and have been happy with it. But approaching Black Friday, last year, the new version became available – the Ninja Foodi Smartlid. Whereas the original Foodi Multicooker had two lids – a hinged air-fryer and baking lid permanently attached to the base unit, and a second pressure-cooker lid – the Smartlid has a single hinged lid, with a sliding bar to select between the various modes – pressure-cook, steam cooking, and air-frying and other fan-oven modes.

It is no smaller than the earlier model, but it is more convenient and – for some variants – more versatile. I got the top-of-the-range OL750UK (of course) which has 15 different methods of cooking, and included an integrated meat-probe that allows you to control cooking by the internal temperature of a food item.

So I’ve had this since November 2021, and am really happy with it; using it for pressure-cooking, air-frying, baking, bread making (with steam) and multi-layer meal cooking, also with steam (i.e. carbs in the bottom, green veg on the first rack, and meat on the top rack). It really does make cooking easy, and is quicker and cheaper to run than an oven. I haven’t actually used my cooker (oven or hob) for over a year!

As a result, many new recipes I post here may be optimised for the Foodi, or similar device (as essentially, this is my personal recipe book). But it should be easy for others to understand the recipe and adapt it for their own purpose.