As described earlier, I’d successfully done my first cook on the new pellet grill, by my kitchen door. Soon after, I decided to move it to my BBQ area at the foot of the garden. Not very far, and paved all the way. So I was wheeling it down the garden, and was two thirds of the way there, when the whole grill tilted, and it was only my muscles keeping it stable – all 300lbs of it.

I managed to lean it against a bench I had pushed against the wall, then looked to see what had happened. One of the wheels had disappeared. Tracing my steps, I found not the wheel, but a bolt.

When the grill first arrived, I found two bolts on the pallet tray, which I asked the supplier about. They didn’t seem to be that worried, so I figured they were simply dropped spares. But no, they had come out of two of the wheels. And a third bolt came out as I move the grill, resulting in one of the wheels only being attached by a single bolt. It had disappeared under the grill, which is why it wasn’t stable.

There was no way I could do anything about it myself, other than make it more stable, with some wood and a book shoved under it. A week or so later, a friend came over to help me manhandle and fix it. By which I mean he fixed it and I watched. 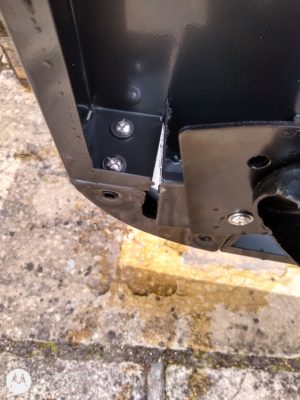 Most, but not all, of the screws had been put on incorrectly. This is not the fault of the manufacturer, but the supplier, who assembled it for me. There is a small locking washer, designed to lock to the bolt head and stop it loosening. For most of the bolts, this locking washer was the wrong side of a flat washer, and was doing nothing. Many of the bolts were hand-loose. My friend removed them one, by one, and put them back in, the right way.

But there was worse to come. Because of the way that wheel had been flexed, the bottom shelf, to which the wheel was bolted to, had been twisted, and a weld broken. We put the wheel back on properly, and it is currently holding it together, but I am not happy. Aside from any weakness, the broken weld has opened up uncoated metal, which could fall foul to rust. So I have asked for a new bottom shelf. I am still waiting to hear.

In the meantime, the grill is now stable, and I am able to cook on it. And I have a couple of times – a turkey crown, and some brisket. 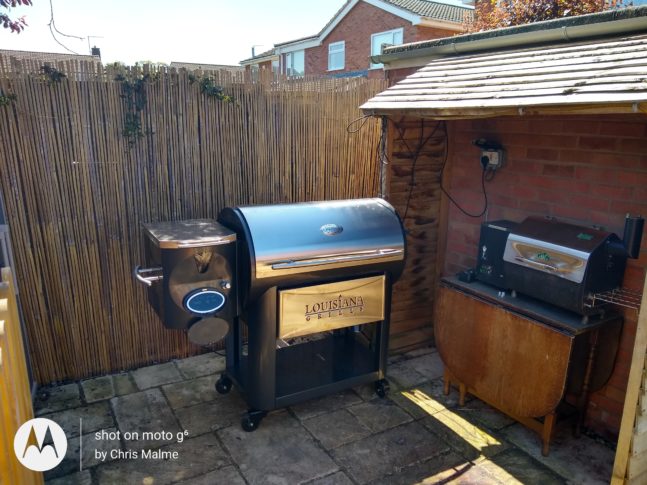