I bought my old Traeger Pellet Grill in 2011, and it has done me well. Even after the controller stopped working, a few years ago, I managed to safely rewire it with a simple relay and timer mechanism, and retain much of its function. But I knew I would eventually replace it with a new grill.

This grill, the rather long-in-name Louisiana Grills Founders Legacy 1200 is not the grill I ordered. The Founders series comes in two versions, each in two sizes: the Premier 800, the Premier 1200, the Legacy 800 and the Legacy 1200. Originally I had my eyes on the Premier 800 – with external dimensions a little bigger than the Traeger, but with about twice the grate size, partly due to the second tier grate. But then I realised that the Premier 1200 was “only” £300 more than the 800. I decided that spending the extra money was worth it for me, to avoid any possible buyers remorse later – it gave me over 3 times the grate area; but it is a big beast.

Alas, the purchase didn’t go at all smoothly. I will refrain from mentioning the company, but they took my money, then failed to deliver on time on 3 consecutive weeks. The problems were actually understandable – I had opted for them to assemble the grill for me, as I didn’t want to do that on my own, and staff sickness prevented that from happening. But they didn’t communicate that. They didn’t communicate at all, unless I called them first.

If they had been up front about it, it wouldn’t have become the mess it was. Instead they kept making promises – twice assuring me that the grill was being assembled at that moment, and promising a delivery “next week”. Next week would come with silence from them, I would chase and chase, and then be told exactly the same again – “We’re assembling it for delivery next week”.

On the Monday, I received a phone call. Please, PLEASE… if you are in business, NEVER start a call to a customer with “I’ve got some bad news and some good news…”

The bad news was they had finally unboxed my Premier 1200 – the grill they had twice told me they had already assembled – and it was damaged. Unsellable. The good news was that they had a Legacy 1200 that they would let me have for the same money.

The Legacy 1200 was the grill I’d looked at and laughed at the thought of owning. At £2200, it was £700 more than the grill I had bought (a thousand quid more than the grill I originally considered). Whereas the Premier range was black coated steel, the Legacy was stainless steel. It was double walled (for heat retention) and had an internal light (for cooks at night or late evenings). It also came with a cast iron griddle which can replace 1 of the 3 stainless steel grates to provide a flat surface for griddling – eggs, onions, hash browns etc…

And now it is mine. They delivered, as promised, on Tuesday; I gave it my first try-out yesterday. It is a Beast, and I love it. 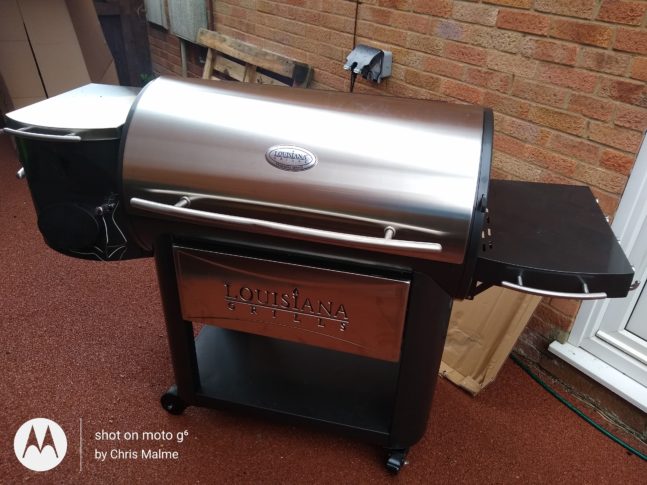