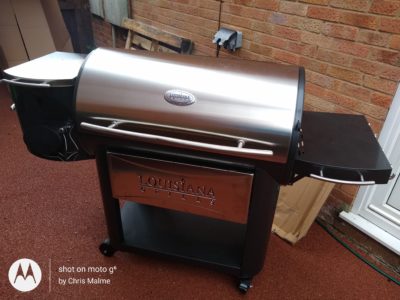 As detailed in the earlier post I’ve ended up with this beast of a pellet grill, which is far more than I intended to buy.

It is of stainless steel construction, double walled so as to retain heat. It is capable of temperatures from low (smoking) to 600°F (315°C), which is much higher than my Traeger would go. It has a full PID-style electronic controller, which means it regulates its own temperature, and can also monitor up to 4 food probes (2 supplied with the grill). It has a “direct flame” option – pellet grills usually heat via circulation, with a baffle between the burn pot and the food. But with this grill, you can open that baffle for grilling steaks and such over flame. More-over, unlike the similar function of my portable grill, the control for this is outside of the grill and easy to access.

Other joys include a cast iron griddle which can replace one of the 3 stainless steel lower grates. I haven’t tried this yet, but I think I will probably have this in the grill most of the time, as the grill will still be plenty big enough for me. This can be used for things like eggs, bacon, onions – anything you’d want to cook on a griddle.

Utter luxury – it even has an internal light you can use after dark.

A couple of not-so-goods, but nothing terrible. Firstly, the hopper is advertised as holding 29lb of pellets, but I used a new 20lb bag of Lil Devils pellets, and could only get three quarters of the bag in. So something odd there, though I am not really bothered. I managed 8 hours of cooking on a single hopper, so that is good enough for me. Secondly, the remote app is a bit naff, and lacking in functionality. With it you can change the grill temperature, and monitor the grill and the food probes, but that is it. Also, if you do anything else on your phone or tablet, the app has to restart again, which means you can’t rely on the app notifications. That is the biggest disappointment, to be honest, but overall, I am winning by a lot.

Yesterday, I did my first cook on the grill; a small piece of brisket and a lamb shoulder. You can see by the size of the two joints that this thing is huge.

The cook went very smoothly, with no hiccups. I under-cooked the lamb a little – perfectly fine, but rare – but it tasted delightful. The brisket came off at 8pm and rested until 9:30pm. It wasn’t the best brisket I’ve eaten, no “carving like butter”, but it tasted great, and will be fine in sandwiches. As I say, the aim of this cook was to concentrate on the grill, not the meat.

Now I know how it works, and have confidence in it, I can now concentrate on the cooking, and let the grill take care of itself.

At the moment, the grill is by my kitchen door, but it will be moving soon. I am working out where to put it. Originally, I thought it too big for my Smoke Shack shelter, where my Traeger is. But I can now see it will fit if I remove the side table, which I don’t really need. I might give that a try and see how it goes.

As for the old Traeger – that is going to a friend who may be able to make a new controller for it. So nothing is wasted. 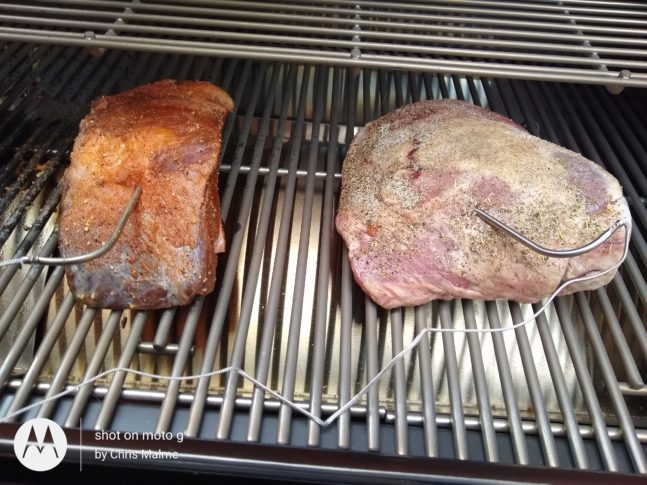 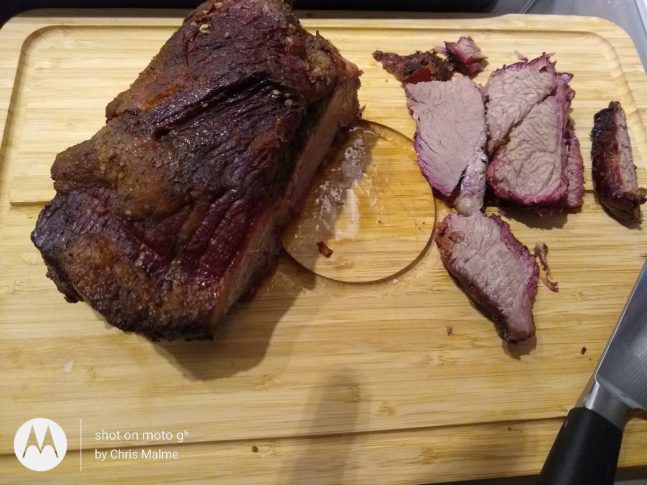