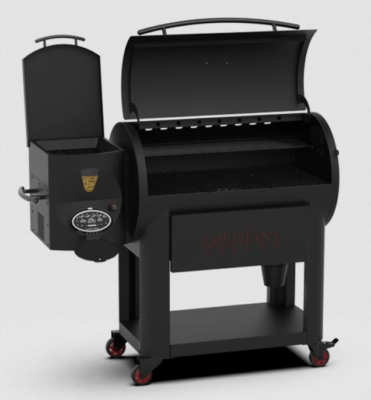 So here is a preview of the new toy, a Louisiana Grills Founders Series Premier 1200. It isn’t here yet, so the picture is stock. I am having it assembled before delivery – having assembled one pellet grill in the past, I decided I’d pay for someone else to do it. So the new grill should arrive next week.

I was looking at the new Pit Boss grills, which is what my friend bought, but they don’t come with remote control via WiFi as standard. Which I am now used to with my GMG Davy Crockett, and would not like to be without. But the same dealer also stock Louisiana Grills, which I am familiar with, having looked at the a while back. Turns out that Pit Boss and Louisiana Grills are made by the same company.

So what does this have that my old Traeger doesn’t? It’s bigger – probably about 60-70% bigger, but because it is designed with a lower and upper rack, it has 4x the capacity. This may sound stupid for my home grill, but I’ve frequently found myself cooking for a dozen or more, and having to use both my Traeger and Davy Crockett, and still be working the grills hard. It will be nice to have plenty of room and not have to juggle things around too much.

It has the full temperature control, managed by the internal grill temperature probe, plus sockets for up to 4 food probes (it comes with 2, which will probably be plenty). As mentioned, it can also be controlled remotely from an app. This isn’t quite as silly as it sounds. I sometimes do long and slow all-night cooks, and being able to roll over in bed, check that the temperature is ok, and go back to sleep is great (and also likely to have me accused of being “soft” by the guys who use charcoal). It also allows me to create “presets” – tried and tested temperature patterns for different dishes – “start at 300°F, for 30 minutes, reduce to 240°F for 20 minutes, then cook at 190°F until the internal temperature of the meat is 165°F”. Imagine having such presets for everything you commonly cook, and it begins to look really good.

The latest pellet grills – including my Davy Crockett portable grill – have the option of opening up the heat guard for flame cooking; great for steaks. But it has always meant moving the food-laden cooking grate to get at the heat guard, and possibly burning yourself doing so. The new grill has a knob on the outside for exposing the flame.

Pellet swapping. Different pellets have different wood mixes and different flavours. Sometimes you want to cook with Mesquite, and your pellet hopper is full of Oak, meaning you have to bale the hopper out with a mug or something. This model has a pellet dump chute. Put a bucket underneath, and open the chute and the hopper is cleanly emptied and ready for something different.

As you can probably tell, I am quite excited by all of this, and I will no doubt be writing more when it arrives and I get a chance to cook with it.