I’ve just replaced my Ninja Air Fryer with a Ninja Foodi – more on that, later.

It was a sensible move, in that it combined the functions of at least 3 large counter top devices – Air Fryer, Instant Pot and Slow Cooker – into one. My old Air Fryer and trusty Morphy Richards Sear & Stew slow cooker are going into storage, freeing up much needed space in my kitchen. My Instant Pot has been donated to some very grateful neighbours, who are going to make good use of it.

However, other aspects hadn’t occurred to me. I always quite liked the pull-out basket the Air Fryer had. It meant that the unit could go under a wall unit as it is front-opening, unlike the Foodi which needs clearance for its hinged lid. It was good for giving things a quick shake halfway through, and pretending I was really “frying tonight”. But I’m just realising that, apart from that, it didn’t actually give much advantage.

Despite the adverts showing people pulling out the basket and tipping out a plate of chips, doing that was likely to be followed by a thin dark stream of grease from underneath the crisp plate. So I used to remove food from the basket with tongs or a slotted spoon, just like I will a from a Foodi.

The downside of the Air Fryer’s basket is that it was huge and awkward for when you wanted to wash it up. As well as the pot, it had a large chunk of the Air Fryer’s body attached, and a large handle. It was also full of inconvenient holes where grease always got lodged. It was never something I would place in a bowl and wash, it was always a “fill with soapy water, and then clean it under the tap” job.

In comparison, giving my new Foodi’s bits a wipe down, after unpacking, was simple and done in the sink; it is just easier to handle and wipe down. It is a simple smooth bowl, and even though it is considerably bigger than the Air fryer’s basket, it seems so less cumbersome. 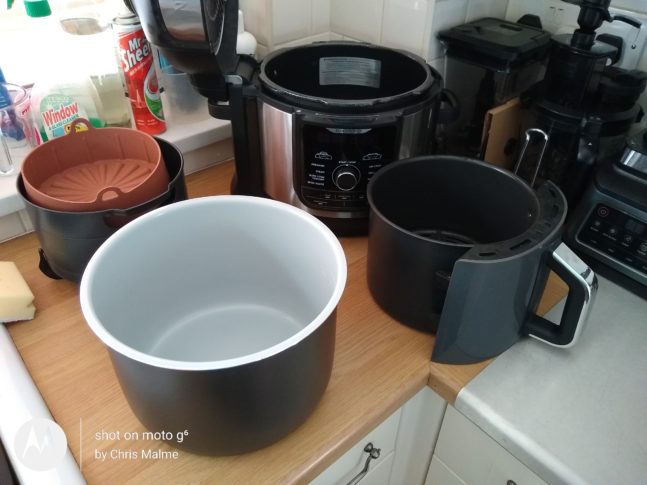