It’s been a few years since I last grew tomatoes, and I’d forgotten many of the little things I had learned. Mainly on how to remove suckers before they became major fruit-bearing parts of the plant, and how to keep the plant neat.

As a result, my tomatoes have been trailing on the floor, despite being raised a foot or so, and it is hard to see where one plant stops and another starts.

My beagle, Katie has been talking advantage of this, and has been nicking green tomatoes from where she can reach them.

So I have been attacking the plants with cable ties, and bringing the lower branches back up into the plant. I’ve also done what I should have in the first place, and tied the canes together with a crosspiece, to stabilise. I I’d thought earlier, I would have added another crosspiece. lower down, but the time for that has gone. Next year, perhaps.

The plants do look much neater, and the fruit is no longer dragging on the ground, although Katie can probably still reach some of it. If nothing else, it lets me get to the base of the plant easier for watering. 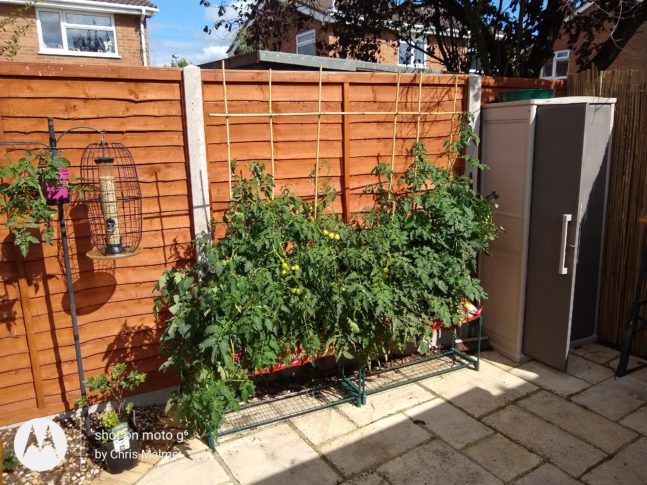