It’s been a while since I last used my soup maker. I’m not sure why, cos it is so easy.

But I recently bought 5kg of Cornish Blue cheese, discounted due to Covid-19 and reduced sales to restaurants. Most of it has been vacuum packed and stored in my freezer, but I kept some to use now; and by coincidence Riverfords have sent me two large brocolli heads.

So, with the soup maker on simmer, I add a chopped onion to some oil, to soften it a little. After a few minutes, simmer is turned off, and I add 1 chopped head of brocolli (including stalk), one sliced carrot and one medium potato, peeled and cubed.

I seem to be out of vegetable stock cubes, but I found a ham one, which should work. I make it up with half a litre of boiling water, which goes into the soup maker.

It is at this point I would start cooking the soup, if I was making it on the hob, adding cheese later, but I find the soup make is tolerant of piling everything in. So I clean up the rind of a bit of Lincolnshire Poacher, and chop that up, and then chop a good wedge of Cornish Blue. That gets added to the mix. I have some goat’s yoghurt to use up, so I pour in half of it, and keep the rest to finish.

Salt and pepper, and then finally top up with more water, to bring it just over the veg and cheese mix.

Press some buttons, and then soup will be ready in 21 minutes. 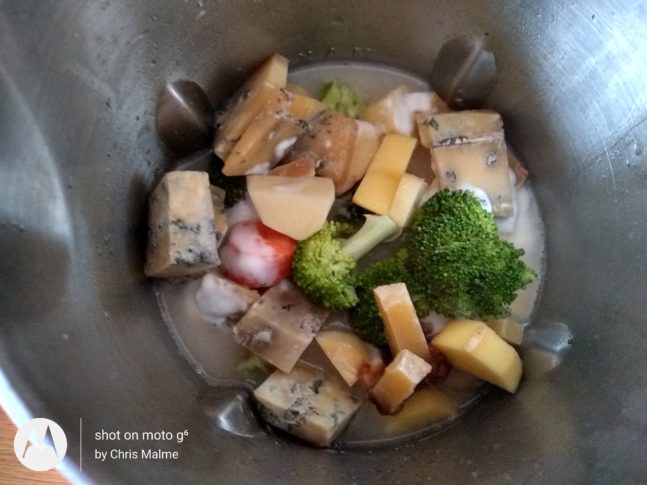 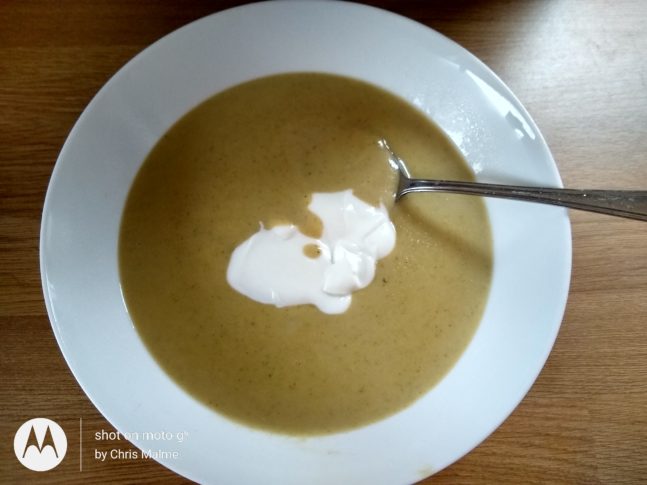