Pearl Barley Milk Pudding
I use Pearl Barley a lot in stews and casseroles, as well as it being a useful addition to a stuffing.

But this recipe uses it in place of rice in a milk pudding, and it is delicious.

Don’t be concerned about the high proportion of liquid to grains. Pearl Barley absorbs a lot! 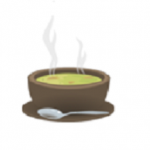